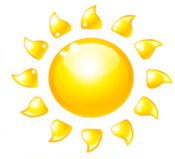 DO YOU LOVE THE SUN?
Unfortunately it doesn't love you…. The warm weather we enjoy in sunny Florida brings everyone outside year round. The sun emits radiation that is known to cause health problems with repeated intermittent exposure as well as prolonged exposure. You do not need to "sun bathe" to develop health problems from sun exposure. Everyday exposure to ultraviolet radiation causes damage to our bodies.

WHAT is ULTRAVIOET Radiation?
UV radiation is part of the electromagnetic (light) spectrum that reaches the earth from the sun. It has wavelengths shorter than visible light, making it invisible to the naked eye. These wavelengths are classified as UVA, UVB, or UVC.
Both UVA and UVB, however, penetrate the atmosphere and play an important role in conditions such as premature skin aging, eye damage (including cataracts), and skin cancers. They also suppress the immune system, reducing your ability to fight off these and other maladies. 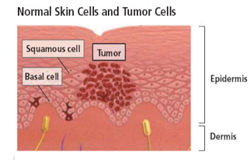 UVA, which penetrates the skin more deeply than UVB, has long been known to play a major part in skin aging and wrinkling (photoaging), but until recently scientists believed it did not cause significant damage in areas of the epidermis (outermost skin layer) where most skin cancers occur. Studies over the past two decades, however, show that UVA damages skin cells called keratinocytes in the basal layer of the epidermis, where most skin cancers occur. (Basal and squamous cells are types of keratinocytes.) UVA contributes to and may even initiate the development of skin cancers. UVA is the dominant tanning ray, and we now know that tanning, whether outdoors or in a salon, causes cumulative damage over time. A tan results from injury to the skin's DNA; the skin darkens in an imperfect attempt to prevent further DNA damage. These imperfections, or mutations, can lead to skin cancer.
Tanning booths primarily emit UVA. The high-pressure sunlamps used in tanning salons emit doses of UVA as much as 12 times that of the sun. Not surprisingly, people who use tanning salons are 2.5 times more likely to develop squamous cell carcinoma, and 1.5 times more likely to develop basal cell carcinoma. According to recent research, first exposure to tanning beds in youth increases melanoma risk by 75 percent.

UVB
UVB, the chief cause of skin reddening and sunburn, tends to damage the skin's more superficial epidermal layers. It plays a key role in the development of skin cancer and a contributory role in tanning and photoaging. Its intensity varies by season, location, and time of day. The most significant amount of UVB hits the U.S. between 10 AM and 4 PM from April to October. However, UVB rays can burn and damage your skin year-round, especially at high altitudes and on reflective surfaces such as snow or ice, which bounce back up to 80 percent of the rays so that they hit the skin twice. UVB rays do not significantly penetrate glass.

SKIN CANCER
By damaging the skin's cellular DNA, excessive UV radiation produces changes that can lead to skin cancer. Both the U.S. Department of Health and Human Services and the World Health Organization have identified UV as a proven human carcinogen. UV radiation is considered the main cause of nonmelanoma skin cancers (NMSC), including basal cell carcinoma (BCC) and squamous cell carcinoma (SCC). These cancers strike more than a million and more than 250,000 Americans, respectively, each year. Many experts believe that, especially for fair-skinned people, UV radiation also frequently plays a key role in melanoma, the deadliest form of skin cancer, which kills more than 8,000 Americans each year. 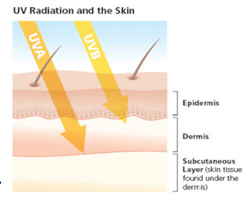 Most of us are exposed to large amounts of UVA throughout our lifetime. UVA rays account for up to 95 percent of the UV radiation reaching the Earth's surface. Although they are less intense than UVB, UVA rays are 30 to 50 times more prevalent. They are present with relatively equal intensity during all daylight hours throughout the year, and can penetrate clouds and glass.

Skin cancer is the most common form of cancer in the United States. More than 3.5 million skin cancers in over two million people are diagnosed annually. Each year there are more new cases of skin cancer than the combined incidence of cancers of the breast, prostate, lung and colon.

One in five Americans will develop skin cancer in the course of a lifetime.

Basal cell carcinoma (BCC) is the most common form of skin cancer; an estimated 2.8 million are diagnosed annually in the US. BCCs are rarely fatal, but can be highly disfiguring if allowed to grow.

Squamous cell carcinoma (SCC) is the second most common form of skin cancer. An estimated 700,000 cases are diagnosed each year in the US,10 resulting in approximately 2,500 deaths.

BE SUN SMART & PROTECT YOURSELF

From the Desk of Melissa Skaff- Schultz ARNP-C

MYTH:   Eighty percent of a person's lifetime sun exposure is acquired before age 18, so if I'm older, it doesn't matter how much sun I get.
FACT: Actually, only about 23 percent of lifetime exposure occurs by age 18. You can — and should — help prevent sun damage at every age by following the Skin Cancer Foundation's sun protection Guidelines. (link to http://www.skincancer.org/Guidelines/).

MYTH:  Tanning at a salon is safer than tanning outdoors — it's a controlled dose of UV radiation.
FACT: When compared to people who have never tanned indoors, indoor tanners have a higher risk of all forms of skin cancer. A controlled dose of tanning lamp radiation is a high dose: Frequent tanners using new high-pressure sunlamps may receive as much as 12 times the annual ultraviolet A (UVA) dose they receive from sun exposure.

MYTH:  Some ingredients in sunscreen can cause cancer.
FACT:  Current research shows that when used as directed, sunscreens are safe and effective. The Skin Cancer Foundation has always recommended using a sunscreen with an SPF of 15 or higher as one important part of a complete sun protection program.

MYTH:  The sun is the best way to get vitamin D.
FACT: Our bodies can produce some vitamin D following exposure to the sun's ultraviolet B (UVB) radiation. However, after a limited amount of sun exposure (approximately five minutes daily for a Caucasian in New York at 12 PM in summer), vitamin D production reaches its maximum. Further UV exposure will actually break down vitamin D to inactive compounds! Furthermore, sun exposure increases your risk of skin cancer and accelerated skin aging. The safest way to obtain vitamin D is through diet and supplements.

MYTH:  You can't get sun damage on a cloudy day.
FACT:  Just because you can't see your shadow doesn't mean you're safe from the sun's damaging rays. Believe it or not, up to 80 percent of the sun's UV rays can penetrate through clouds and fog.

MYTH:  A "base tan" protects your skin from sunburn.
FACT:  There is no such thing as a safe or protective tan; any tan at all is a sign of skin damage. Skin tans in response to UV damage to the skin's DNA; a tan is the skin's attempt to repair sun damage and prevent further injury. But these imperfect repairs can cause gene defects that can lead to skin cancer.

MYTH:   I use a sunscreen with an SPF of 50, so I'm all set.
FACT:  A sunscreen's SPF (sun protection factor) indicates that it protects against UVB rays, but you need protection from both UVB and UVA. For effective protection, apply a broad spectrum (UVA/UVB) sunscreen in addition to following our Guidelines.

MYTH: People of color don't get skin cancer.
FACT:  People of color are less likely to develop skin cancer than Caucasians, but they have a higher risk of dying from it. A very dangerous and fast-spreading skin cancer known as acral lentiginous melanoma is more common among darker-skinned people and may appear as a suspicious growth in the mucous membranes, under the nails, or on the palms or soles of the feet. Whatever your skin color, protect yourself, perform regular skin self-exams, and obtain a professional full-body skin exam every year.

MYTH:  Windows protect us from the sun's ultraviolet rays.
FACT:  While glass does block most UVB rays, UVA radiation can get through. Which means that even indoors or in a car with the windows up, you can tan or burn. However, you can have special window film installed that blocks most UVA radiation as well.